Oops! It appears that you have disabled your Javascript. In order for you to see this page as it is meant to appear, we ask that you please re-enable your Javascript!
Press enter to begin your search

The History of the Furry Fandom

How did it all start? Who “invented” the first furry? What were “funny animals”?

In my last “The Furry World” segment I covered Furries in the media. Today I talk a little bit about the history of the furry fandom. 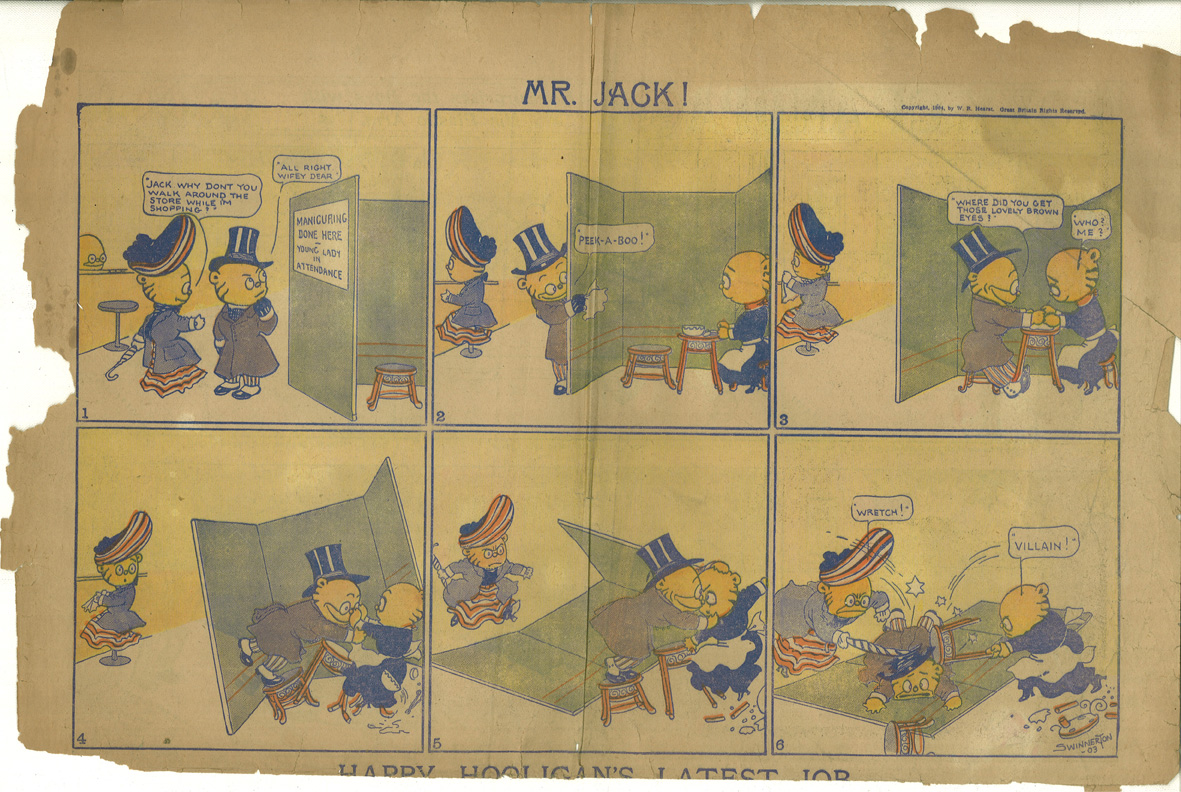 The 1896 comic strip “Mr. Jack” was one of the first comics to utilize anthropomorphic characters

Some of the earliest furry caricatures can date back to the days of early man, with anthropomorphic drawings being featured in ancient civilizations ranging from the ancient Egyptian gods to characters found in Aesop’s Fables and in stories by Native Americans, etc. But this isn’t a history lecture of absolutely everything anthropomorphic, no. It would be nigh-impossible to pull off such a feat, and would make for one really really long blog post. Instead I will be focusing a little bit on the furry fandom as we know it today. 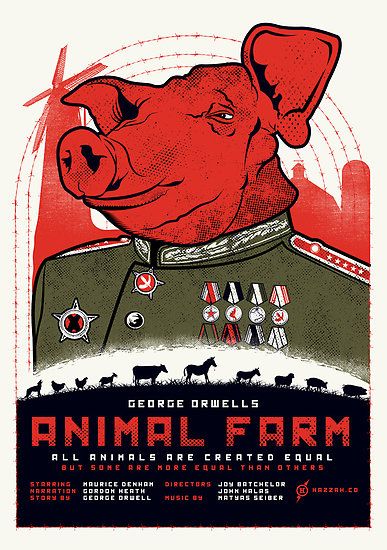 The first time that anthropomorphic animals were given a name may have originated from the children’s book “Funny Animals“. Since the book was published in the 19th century, the term “Funny Animals” came to mean any kind of animals that were doing people things – such as walking, talking, etc. The term is still used today, although it has lost of lot of it’s popularity.

Steamboat Willie was the debut of Mickey Mouse, easily the most well-known Funny Animal in the world

The Funny Animals may have planted the seeds of the furry fandom, but the real furry fandom as we know it didn’t begin to sprout until the 1970s.

Vootie was “the fanzine of the Funny Animal Liberation Front” and was one of the first and most significant APAs to focus on Funny Animals back in the 1970s.

What’s an APA, you may ask? An APA, or Amateur Press Association, was like a club for artists in which artists sent their works to an individual or an organization, in which turn distributed the content back out to all of the contributors. Unlike fanzines or comics, APAs did not distribute content to non-contributors or any other consumers. 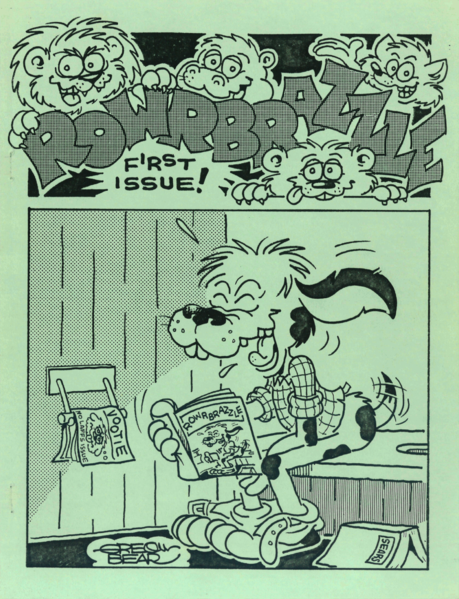 Rowrbrazzle (1983), arguably a marking point when a large part of the Funny Animal fandom merged with the Furry Fandom

Rowrbrazzle was a turning point. It was the first APA dedicated specifically for the “furry” community. It showed that there was a clear interest in the Furry fandom, with members taking their interests a larger step further than Funny Animal fans did.

Fred Patten, famed Furry historian, states that significance of Rowrbrazzle to the furry fandom as – “The first clear signs of the independent furry fandom were the creation of its first apa, Rowrbrazzle, and the decision by some fans to self-publish furry comic books because there seemed to be enough fans of stories with talking animals to support them (as distinct from earlier attempts to self-publish comics which had to hope for sufficient sales from the general public alone.)”

It’s a common saying that you need to learn how to crawl before you can walk. Furry conventions didn’t just popup as we know them to be today. No, the first “furry conventions” took place as small meetups at comic conventions referred to as “furry parties”. Funny animal discussion groups took place at comic and sci-fi conventions, especially within the Cartoon/Fantasy Organization (which focused on anime and Funny Animals) and the Rowrbrazzle APA. These furry parties would stream anthropomorphic movies such as Animalympics, Disney’s Robin Hood, and The Secret of NIMH, and hold conversations about anthropomorphic characters and furry costuming.

In a serendipitous moment, both C/FO and Rowrbrazzle were having separate room parties at San Diego Comic-Con 1985, with an overlap between the two groups. The two groups formalized a yearly meetup that lasted until Confurence 0 in 1989. That wasn’t the only existing furry party however.

The Prancing Skiltaire was another important furry room party that originated in California beginning in 1985. The first one took place at the Westercon Science Fiction Convention and was named after the house of one of the members. The Prancing Skiltaire, one of the hidden gems of the furry fandom, still has monthly furry house parties even to this day.

The Prancing Skiltaire house, which still has monthly furry parties to this day

After it was clear that there was demand for these furry parties, the first furry convention was born…

January 21, 1989. The day the world’s first furry convention took place. ConFurence 0 in Costa Mesa, CA. There was an estimated 65 people in attendance (with some reports of over 100) and the convention included a dealers den, a costume contest, and two programming rooms for various events (including guides on fursuits and a viewing of Animalympics). 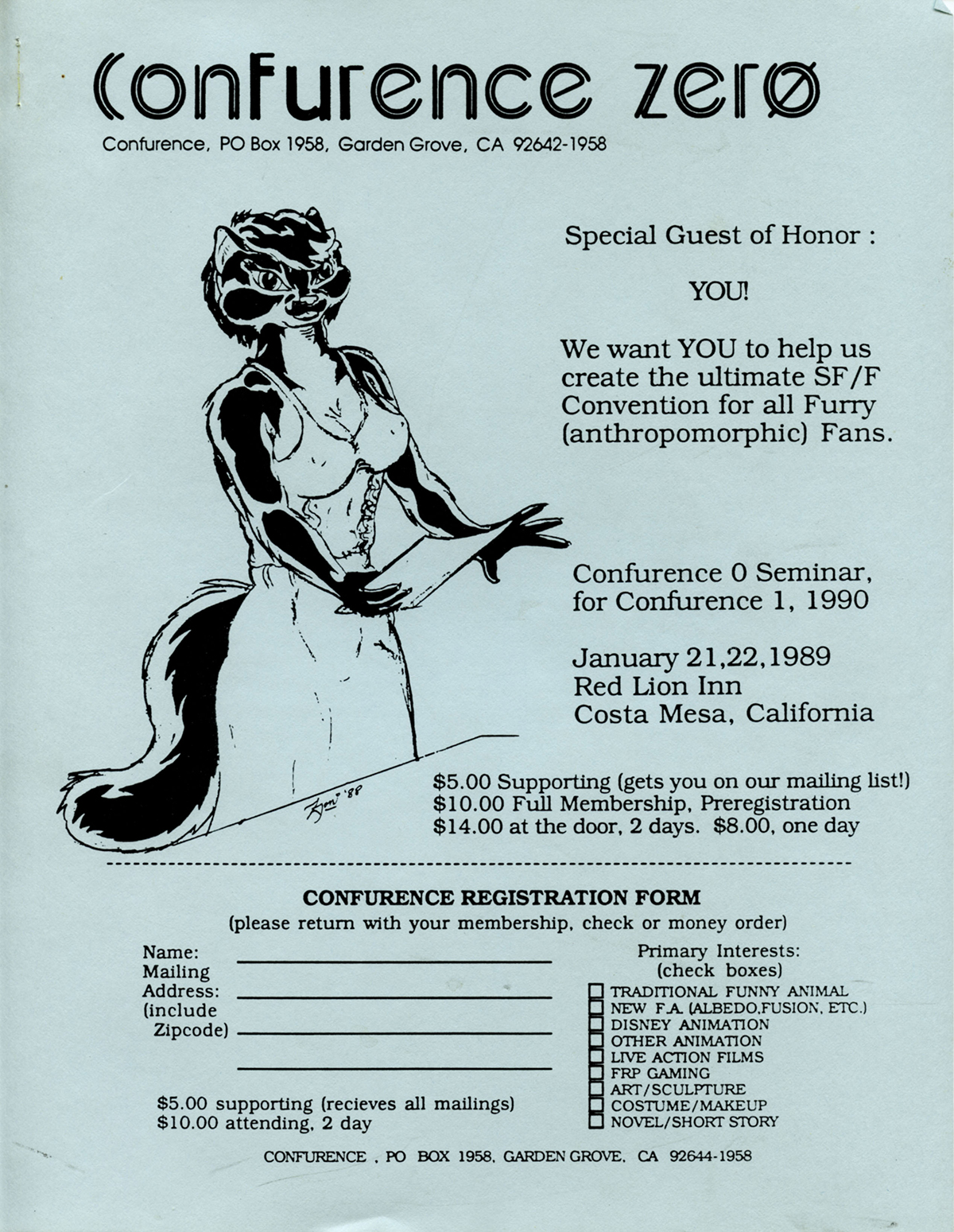 ConFurence 0 was a very important moment for the furry fandom. It was the first furry convention and clearly demonstrated there was an interest in having these public meetups, even more so than the small furry parties at comic and sci-fi conventions. 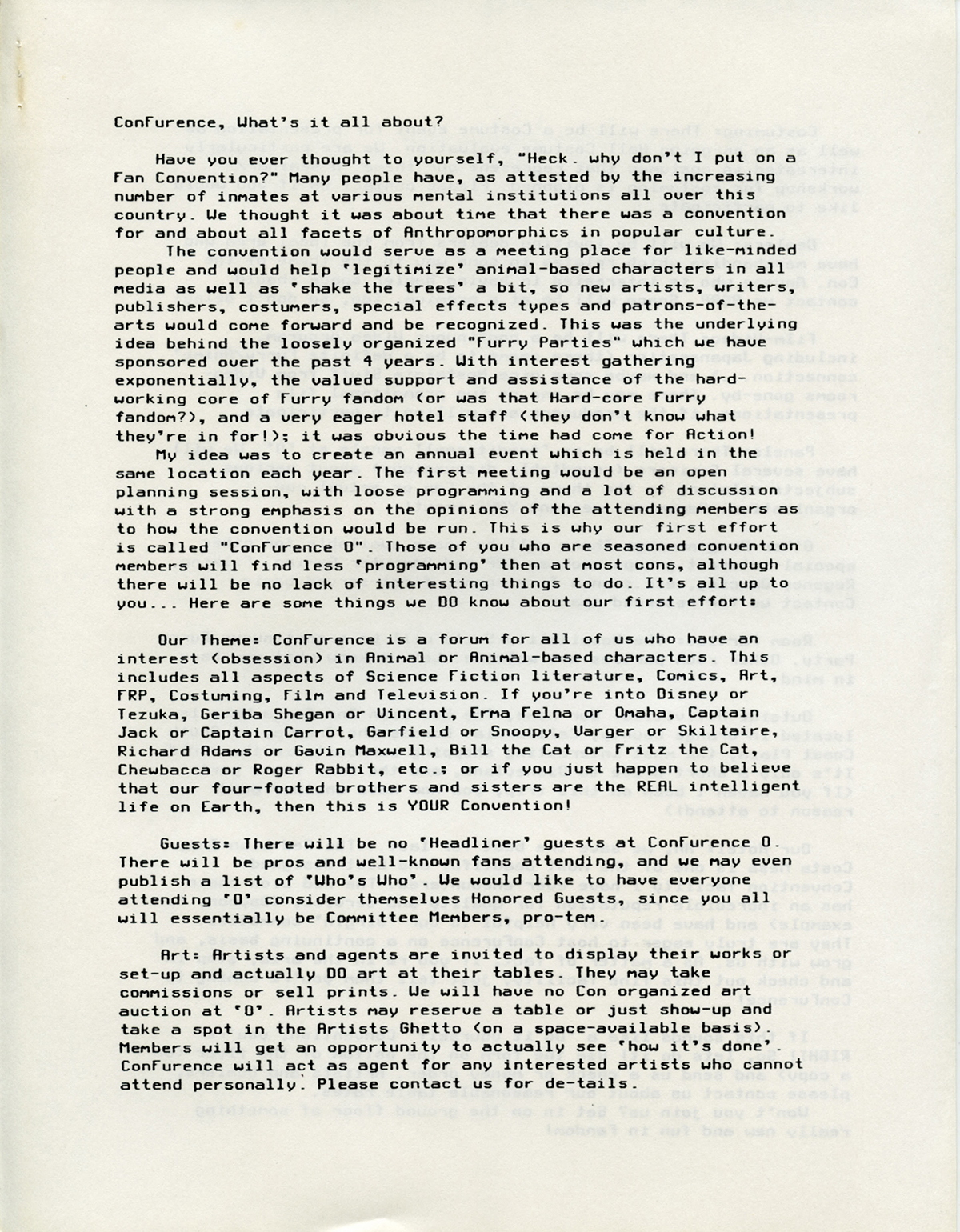 A page from Conference 0, the first furry convention, describing the purpose of the convention

ConFurence 0 may have been a small convention, but it was a huge success. The aftermath report details some of the successes of the first ever furry convention. There was nearly 200 pieces of artwork available for sale (one selling for as high as $450, almost $900 after adjusting for inflation). Panels such as “My First Furry”, “Furries and Gender”, and “Species Panel” were widely successful, even though their format was considered to be unusual at the time.

Furries still weren’t widely known in the 1980s, and Media coverage of the furry fandom was just barely beginning to start the 1990s. More furry parties began to sprout up in the 1990s however, along with over a dozen different furry conventions including Mephit Furmeet, UK FurCon, Furtasticon, ConFurence East, Eurofurence, Furry Fandom Lounge, Feral!, Further Confusion, Conifur Northwest, Furloween, Furtasticon, and Anthrocon. 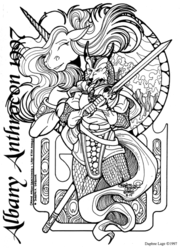 More Funny Animal shows and movies were being played on the television in the 90s as well, including Tiny Toons, Animaniacs, SWAT Kats: The Radical Squadron, and more.

But perhaps most importantly, the furry fandom was beginning to grow an online presence with online furry services such as FurryMUCK, alt.fan.furry, the fursuit mailing list (which coined the term “fursuit”), VCL, Tiger’s Den BBS, and other online communities varying in size and scale.

The 2000s and the Internet impact

Conventions in the 2000s really took off, with another 30+ new conventions beginning to popup.

The most significant impact on the furry fandom of the 2000s? The Internet.

Furry MUCK and MUD groups may have reached their peak of popularity in the 1990s and early 2000s but even bigger online communities were arising. FurAffinity, currently the world’s largest furry website, started in 2005. Snapshot of the early FurAffinity site design on December 13th 2005, just 9 days after it’s official launch.

Other notable furry websites include YiffStar in 2002 (later rebranded as SoFurry in 2009), DeviantArt in 2000 (not strictly a furry website, but still important to the fandom), WikiFur in 2005, Yiffy.net in 2002, FurBuy in 2000, e621 (2007), and more. There are way too many furry websites to chronicle all of their histories in this post alone, so expect another “The Furry World” post covering them in the future.

There are also many non-furry sites that have been extremely important to the growth of the furry fandom. 3D chat clients like Second Life (2003) and IMVU (2004) are still popular in the fandom, and social media sites like Twitter (2006), Facebook (2004), Myspace (2003), the r/furry subReddit (2008), and online imageboards, etc were also a common way for members of the furry community to stay connected.

In a 2009 furry survey, 79% of respondents said they belonged to a furry website, and almost 75% of those who said they do also said they use FurAffinity.

It’s undeniable – the internet had a great effect on growing the size of the furry fandom as users from across the world can now easily find  and interact with others that share their similar interests.

The furry fandom could hardly be considered small anymore, even if it’s still considered to be an unpopular niche. Estimates range from hundreds of thousands of members to possibly even millions worldwide.

The Fursuiters of Anthrocon 2017

Instant messaging clients are also becoming more and more popular in the fandom, with many furries choosing to use clients such as Telegram, Slack and Discord to stay connected.

Opinion on the future of the fandom

It’s clear the furry fandom is still growing. Will the Furry fandom ever go mainstream? One could already argue that it already has. It’s anecdotal but it seems as if most people have at least heard of furries before. Recent coverage in pop culture further shows that the public has at least noticed the furry fandom. We may not have the most members in our fandom, but that’s okay. Honestly it’s probably better that way.

I would say to expect membership to keep growing exponentially. Expect more and more attendance at conventions, expect more furry websites, movies, video games, and media coverage. With the virtual reality industry and the idea of a unified metaverse steadily growing, it’s also safe to say the online furry presence will be even greater than ever before, as users could digitally become their own fursona.

Whatever you may think of furries, there is no denying that we’re here to stay.

© 2020 The World of Alpha Lupi. All Rights Reserved. Please Do Not Redistribute Content Without My Explicit Permission.