Press enter to begin your search

Last year I added a Mustang GT to my fleet, and I have plans to add new parts and swap out some of the older ones. So I will be starting a new blog series under “Automobiles” to document my progress. Maybe this series will help inspire gearheads looking for customization ideas.

The Ford Mustang has been my dream car since I fell in love with the 1967 Shelby GT500 in the Nick Cage film Gone in Sixty Seconds as a young kid. Regardless of how you may feel towards the movie remake, Eleanor is still one of most iconic Mustangs in cinema history. Ever since I seen the film I knew I had to get a ‘stang of my own, and the one driven in the 2014 movie John Wick has only added more fuel to this fire.

The 2011 Mustang GT may not be one of the fanciest pony cars on the road, but I love their appearance and performance. The 412 horsepower 5.0L V8 engine is thrilling, it sounds amazing and can go from 0 – 60 in roughly 4 seconds. Enough said.

It’s significantly louder than my old car, and I love it. That deep growl gives my goosebumps every time I start it up. Swapping the exhaust will only make it even better.

Getting to highway speed is a breeze! Acceleration in my old car was not that great, and trying to get it up to 60MPH in order to merge uphill on a bridge was not a pleasant experience to say the least. Being able to quickly get up to speed feels like a major weight has been taken off my shoulder as I no longer have to worry about being a hindrance to the traffic coming up behind me.

Gas mileage was a concern before picking up this car, I expected that I would need to be stopping at the pump much more frequently. Surprisingly it seems to be the same as my old car. A decade of improvements in fuel efficiency and better aerodynamics almost seems to cancel out the addition of an additional 2 cylinders and twice the horsepower. That and my last car was a POS.

Season 1 modifications were based primarily on cosmetics and functionality, and I have not yet added any performance parts.

The initial changes I made were simple. I added a dashboard mount for my phone, as I needed somewhere to place it when I’m using it as a GPS. I also picked up some Kona blue touch up paint to take care of the small chip on the hood, and some white LED lights to replace the drab yellow map lights in the interior. 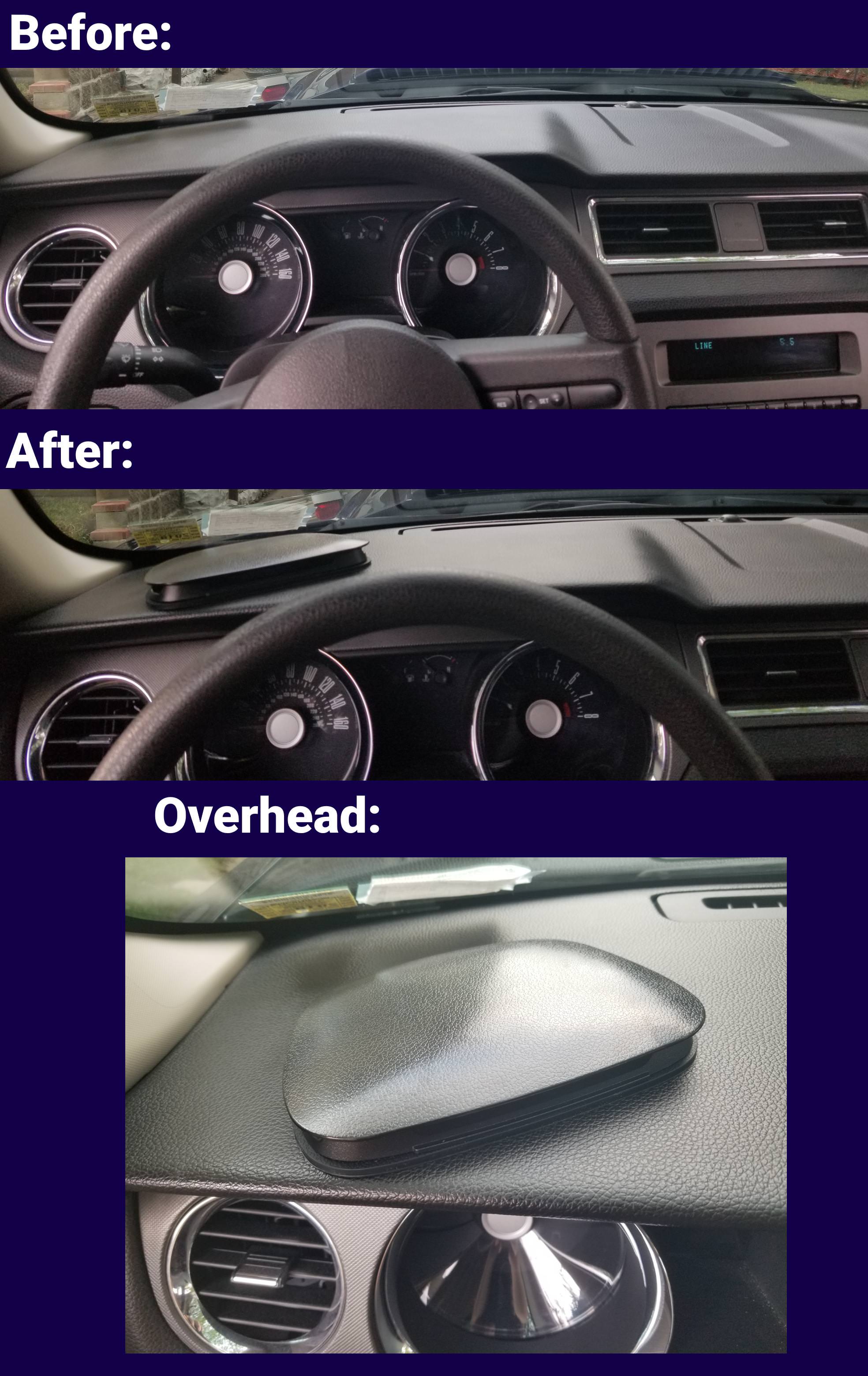 The mount was an easy mod, just peel and stick, and it matches the dashboard! The mount perfectly holds my Note9 without any issues. The phone remains firmly in place while driving and the charging port and headphones jack are not blocked.

Replacing the map lights was a tiny bit more involved. I regret not taking any photos of the install process, as I’m it would probably be beneficial to some. However, here is a good guide for anyone looking to do the same:

What the video does not show, although it does mention it, the LED lights are slightly larger on than the OEM bulbs so the outer casing will need to be slightly trimmed. 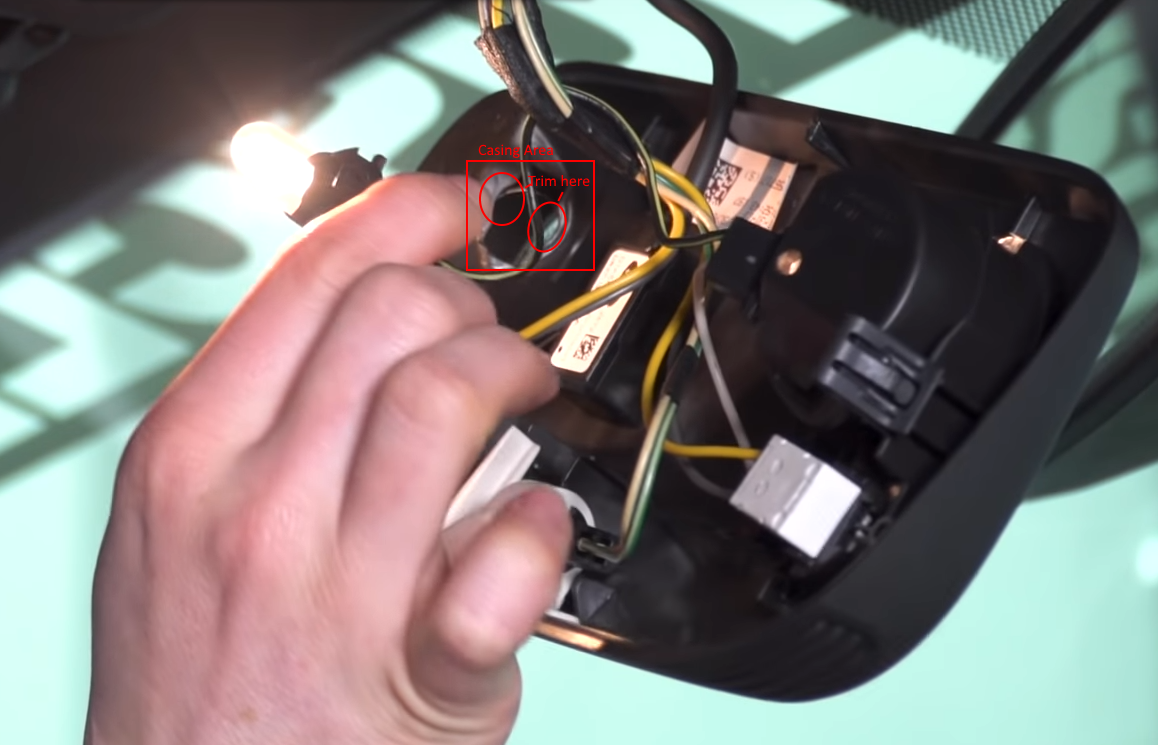 Area that will need to be modified, from the video by American Muscle

The top and bottom edges will need to be slightly trimmed down. I recommend using a handheld Dremel with a sanding band to grind it down a little bit. Go slow to avoid melting the plastic, as it will generate heat, and make sure to get any loose plastic shavings out afterwards. I prefer using the Dremel as the end result will be smoother without any jagged edges.

There are several different LED bulbs that will fit, the ones I choose to go with a cheap pack on Amazon. They were significantly cheaper than the LEDs marketed for the Mustang. I had to grind the plastic edges down a tad bit for them to fit in the connector but otherwise they look just as good at a fraction of the cost.

I noticed there was a few minor chips in the hood’s paint. So I picked up a bottle of Kona Blue touch up paint and got to work 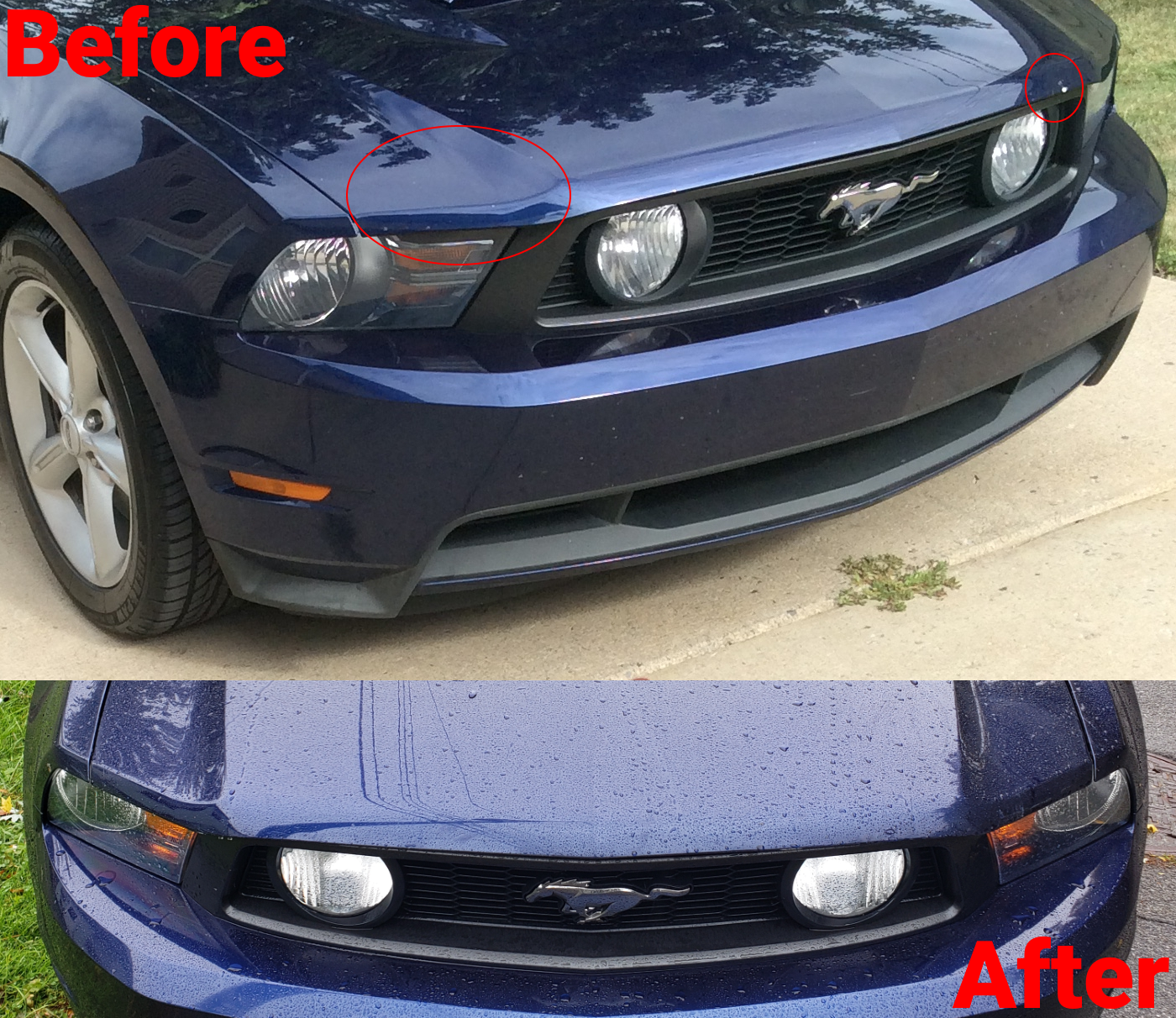 My next modification was a bit more ambitious. I put together a backup camera system that features a license plate camera and a rear view camera monitor. This system is especially useful with the rear window louvers and makes parking a breeze.

I chose not to wire it myself, as I was not confident in my electrical abilities at the time and was concerned with damaging the interior/inadequate waterproofing, so I had it installed by a local shop. 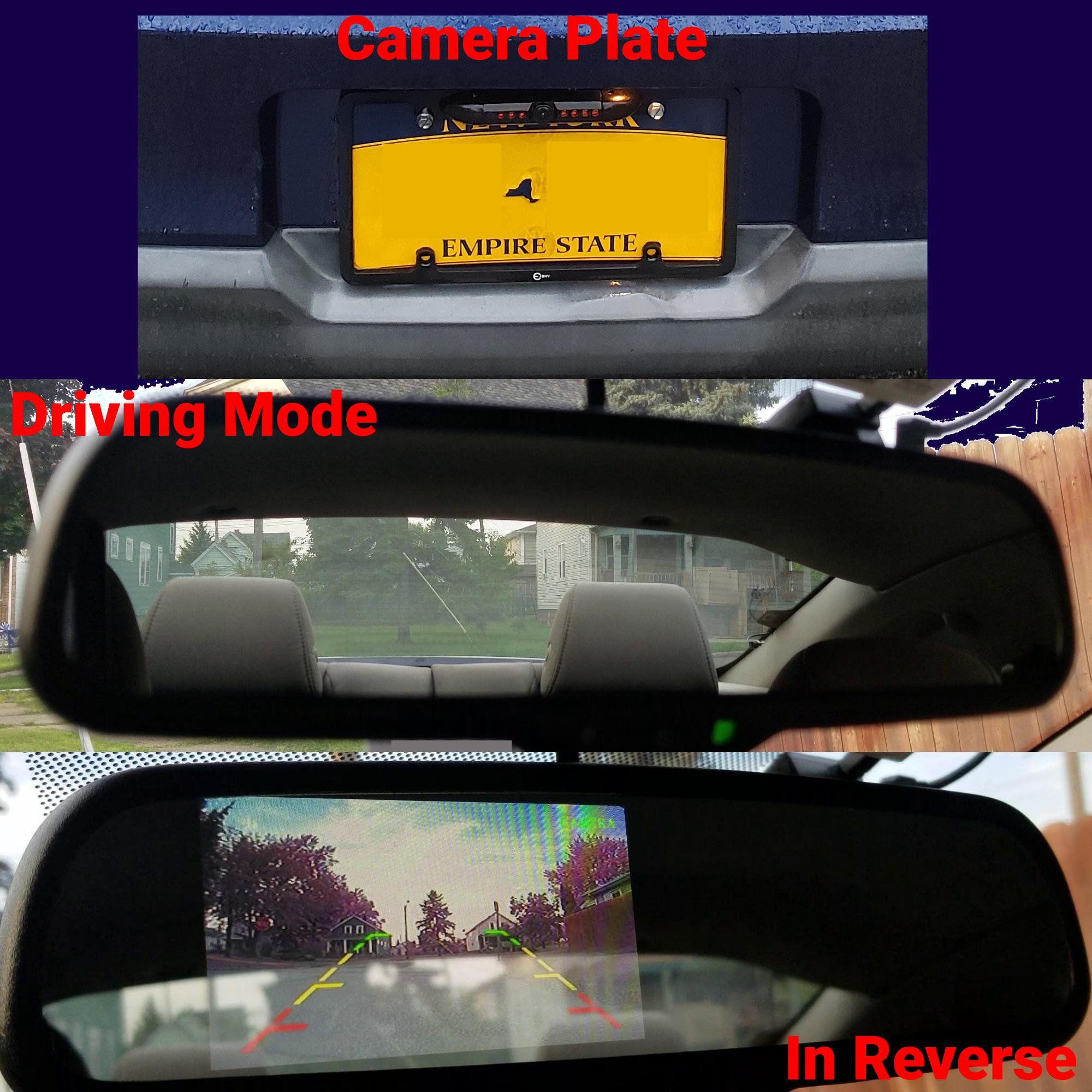 I’m a big fan of adding a dash cam system for CYA purposes. So I picked up the Veckle Mini 0906. It’s cheap, does not take up much space, and is hardly noticeable after the install. It can wired to work with “parking mode”, where the camera continues to record in a lower power state, or it can be wired to start with the ignition. 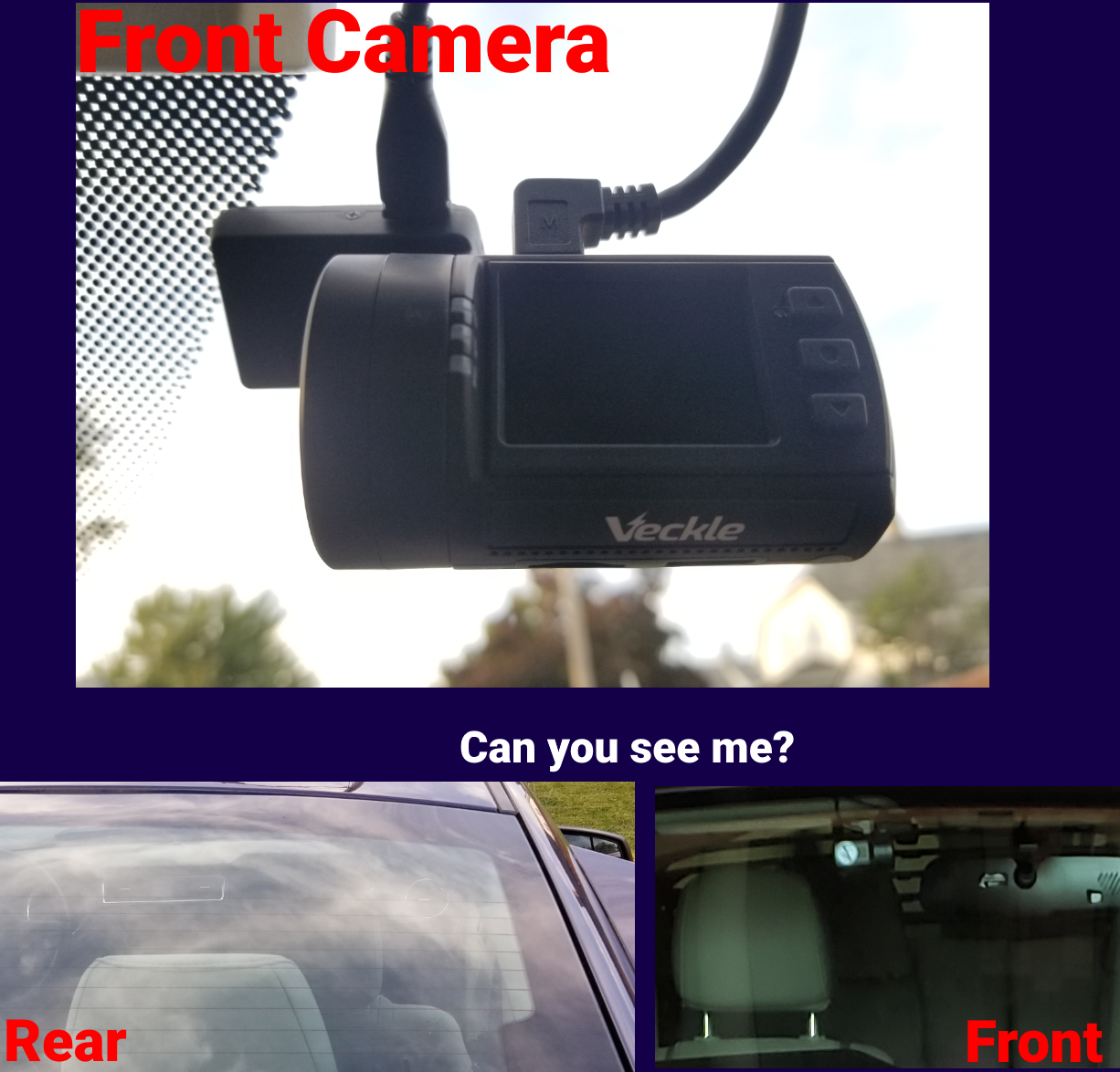 The camera is pretty discrete, as seen in the photos. The rear camera is pretty much invisible, especially with the rear louvers installed. The front camera’s small size makes it hard to see, it’s unlikely you’ll even notice it unless you’re specifically looking for it. It records in 1080p at 30FPS with both cameras connected.

For the interior, I swapped out the black headlight knob for chrome. It was another quick mod that is quickly applied using the sticky backing, and is part of Operation Paint, It Black.

I also worked on adding some additional exterior trim by adding quarter window scoops and a black decklid vinyl, and both can quickly applied. Quarter window louvers/scoops are a common modification for the Mustang, and I was thrilled to see there was scoops modeled after Eleanor. The new scoops give it a more aggressive look, and the vinyl really ties the rear end together. Admittedly, I’m not thrilled with the quality of the vinyl, but it was cheap and I can easily replace it in the future. 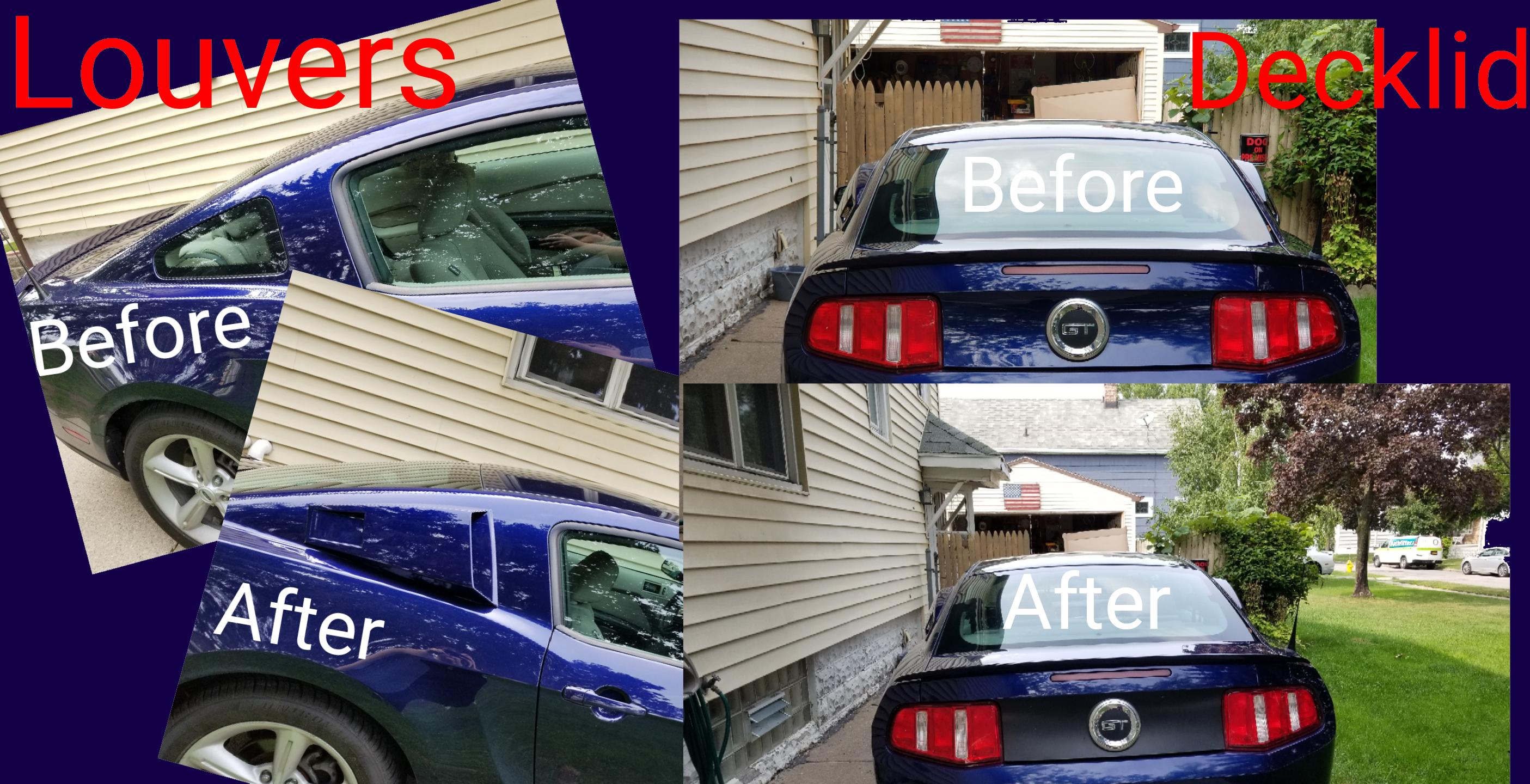 Lastly, I added a couple of black cosmetic pieces to customize it a little bit and I’m really enjoying the black on blue theme. Towards the end of the summer season I added rear window louvers and a California Special spoiler. The window louvers did impair visibility as much as I expected, which was a great relief. From the rear view mirror, they only appear as thin black lines. The interior heat reduction and increased privacy is a nice improvement. 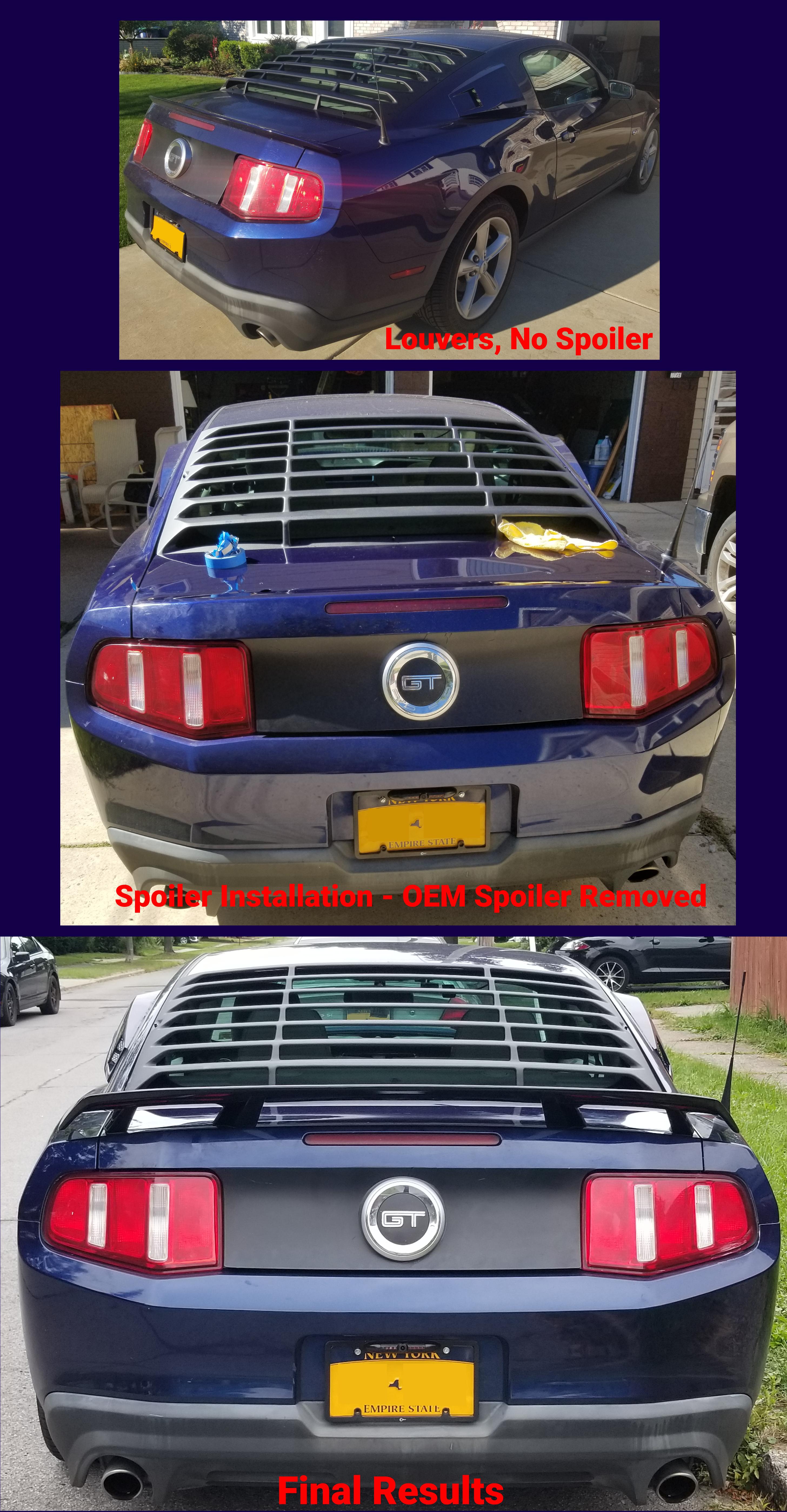 That was everything for the first season. Winter came in, and I had to store it for the winter. 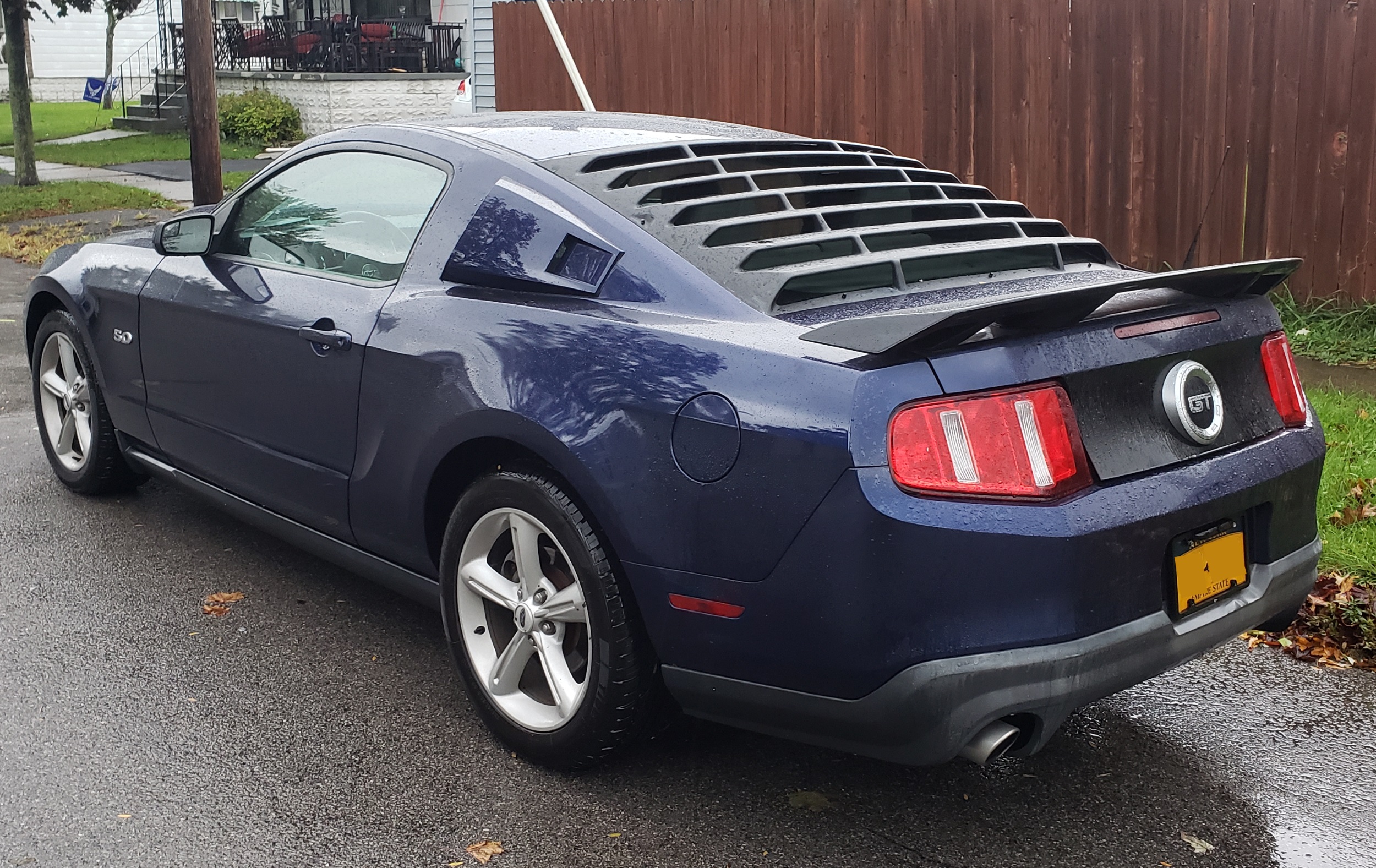 I stabled the pony over the winter in order to avoid the harsh effects of salt and the hazardous icy conditions. During this time I swapped out the OEM fog lights and headlights for halos. Since spring started, I added new LED side marker and license plate lights, obtained a custom license plate and a security system, and began gathering exhaust parts.

So far I picked up Flowmaster Outlaws for the axle-backs and a Pypes X-Pipe for the mid-pipe. Due to NYS’s strict emissions inspections, modifying the cats or using an off-road X-pipe would not be street legal and would fail annual inspection. Fortunately I do have access to a lift to make these modifications a bit more easier, and it certainly came in handy when applying undercoat.

I originally intended to swap out the exhaust after putting the car back on the road but I decided to wait until I have a replacement for the stock over-axle exhaust, which will replace the resonator and open it up a bit more.

Moving forward, this season I plan to install the security system, tint the windows, start building a custom audio system, add some performance parts (such as a tuner), replace the stock brakes, rims, and taillights, and begin on Operation Paint It, Black.

The stock interior does not match the exterior, as everything inside is currently much lighter colored. The door panels, pillars, seats, headliner, etc. As the name implies Operation Paint It, Black will consist of blacking out the interior and adding chrome accents. Either by replacing components, using paints and dyes, reupholstery, etc. Operation Paint It Black will also involve adding more black trim to the exterior, building off of the black and blue theme.